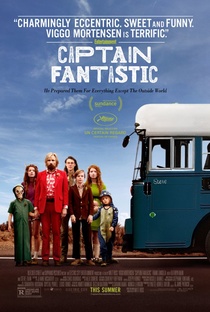 Power to the people, stick it to the man!

Harper: Children don't drink wine.
Ben: In France and other countries, children drink small amounts of wine all the time. It's a digestive. It's not crack.
Nai: What's crack?
Ben: Crack is a crystallized, highly addictive derivative of the stimulant cocaine. In the mid-1980s, it accelerated the decimation of inner-city neighborhoods. Crackheads, some of them kids just like you guys, were killing each other over nothing, over their Nikes.
Nai: They killed each other for Nike? The Greek winged-goddess of victory?

Nai: [from the back seat] What does rape mean?
Ben: When a person, usually a man, forces another person, usually a woman, to have sexual intercourse.
Nai: Oh.
Ben: Who's hungry?
Kids: Me! Me!
Nai: What's sexual intercourse?
Ben: When a man sticks his penis in a woman's vagina… Everyone keep their eyes peeled for deer.
Nai: Why would a man stick his penis in a woman's vagina?
Ben: Because it can give them both pleasure. And because the combination of a man's sperm and a woman's egg can create a baby and continue the human race.
Nai: But that's where she pees.
Ben: Pee comes not from the vagina, but from the urethra, which is within the outer labia. But generally speaking, yes, that is where she pees… Everyone keep your eyes open for game of any kind.