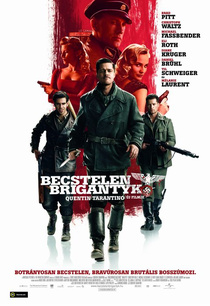 Aldo Raine: Well, I speak the most Italian, so I'll be your escort. Donowitz speaks the second most, so he'll be your Italian cameraman. Omar speaks third most, so he'll be Donny's assistant.
Omar Ulmer: I don't speak Italian.
Aldo Raine: Like I said, third best. Just keep your fuckin' mouth shut. In fact, why don't you start practicing, right now!

Bridget von Hammersmark: I know this is a silly question before I ask it, but can you Americans speak any other language besides English?

[last lines]
Aldo Raine: [smirks widely] You know somethin', Utivich? I think this just might be my masterpiece!

Hans Landa: The feature that makes me such an effective hunter of the Jews is, as opposed to most German soldiers, I can think like a Jew, where they can only think like a German… more precisely, German soldier. Now, if one were to determine what attribute the German people share with a beast, it would be the cunning and the predatory instinct of a hawk. But if one were to determine what attributes the Jews share with a beast, it would be that of the rat. The Führer and Goebbels's propaganda have said pretty much the same thing, but where our conclusions differ is I don't consider the comparison an insult. Consider, for a moment, the world a rat lives in. It's a hostile world, indeed. If a rat were to scamper through your front door right now, would you greet it with hostility?
Perrier LaPadite: I suppose I would.
Hans Landa: Has a rat ever done anything to you to create this animosity you feel towards them?
Perrier LaPadite: Rats spread diseases. They bite people.
Hans Landa: Rats were the cause of the bubonic plague, but that's some time ago. I propose to you, any disease a rat could spread, a squirrel could equally carry. Would you agree?
Perrier LaPadite: Oui.
Hans Landa: Yet I assume you don't share the same animosity with squirrels that you do with rats, do you?
Perrier LaPadite: No.
Hans Landa: But they're both rodents, are they not? And except for the tail, they even rather look alike, don't they?
Perrier LaPadite: It's an interesting thought, Herr Colonel.
Hans Landa: Ha! However interesting as the thought may be, it makes not one bit of difference to how you feel. If a rat were to walk in here right now, as I'm talking, would you greet it with a saucer of your delicious milk?
Perrier LaPadite: Probably not.
Hans Landa: I didn't think so. You don't like them. You don't really know why you don't like them; all you know is you find them repulsive. Consequently, a German soldier conducts a search of a house suspected of hiding Jews. Where does the hawk look? He looks in the barn, he looks in the attic, he looks in the cellar, he looks everywhere he would hide. But there's so many places it would never occur to a hawk to hide. However, the reason the Führer has brought me off my Alps in Austria and placed me in French cow country today is because it does occur to me. Because I'm aware what tremendous feats human beings are capable of once they abandon dignity.