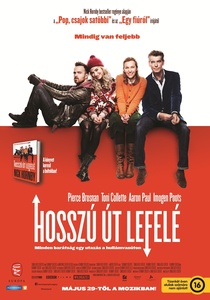 A könyv jobb volt, de a film is egész korrekt.

Martin Sharp: Has anyone ever told you you're a bit of an idiot?
Chris Crichton: I'm a politician, that's all they ever tell me.

Jess Crichton: You're getting a thrill out of this, aren't you, you pervert! Oh my God, you're Martin Sharp! You *are* a pervert.

[first lines]
Martin Sharp: Anyway, to cut a long story short, I decided to kill myself. That's the trouble with suicides, I've learned you can't cut the long story short, because it's the long story that people are interested in. Especially if you're me, which regrettably I was, and still am to this day. So, forgive me if you already knew this, but I'm Martin Sharp, the man who had everything. One wife, two children, three dogs, at least four People's Choice Awards, and five mornings a week on the most successful breakfast show in Britain. They were even offering my Mondays off. So far, so good. I had reached middle-age, unscathed, with money in the bank. Until I met Suzy Jenkins at a launch for a new men's moisturizer. All I can say in my defense, Your Honor, is she looked 25 to me.