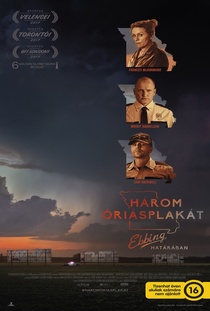 Angela: Why are you never on my side, Robbie?
Robbie: I'm always on your side when you're not being a cunt!
Angela, Mildred: Hey!
Mildred: There will be no more „cunts” in this house. You got that, mister?
Robbie: What? Are you moving out?

Willoughby: You really wanna fuck with the Ebbing Police Department, Red? Do you?
Red: I guess.

Sheriff Bill Willoughby: I'd do anything to catch the guy who did it, Mrs. Hayes, but when the DNA don't match no one who's ever been arrested, and when the DNA don't match any other crime nationwide, and there wasn't a single eyewitness from the time she left your house to the time we found her, well… right now there ain't too much more we could do.
Mildred Hayes: You could pull blood from every man and boy in this town over the age of 8.
Sheriff Bill Willoughby: There's civil rights laws prevents that, Mrs. Hayes, and what if he was just passing through town?
Mildred Hayes: Pull blood from every man in the country.
Sheriff Bill Willoughby: And what if he was just passing through the country?
Mildred Hayes: If it was me, I'd start up a database, every male baby was born, stick 'em on it, and as soon as he done something wrong, cross reference it, make 100% certain it was a correct match, then kill him.
Sheriff Bill Willoughby: Yeah well, there's definitely civil rights laws that prevents that.