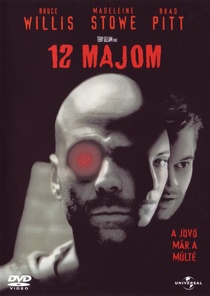 Dr. Kathryn Railly: I mean, psychiatry: it's the latest religion. We decide what's right and wrong. We decide who's crazy or not. I'm in trouble here. I'm losing my faith.

Jeffrey Goines: There's the television. It's all right there – all right there. Look, listen, kneel, pray. Commercials! We're not productive anymore. We don't make things anymore. It's all automated. What are we *for* then? We're consumers, Jim. Yeah. Okay, okay. Buy a lot of stuff, you're a good citizen. But if you don't buy a lot of stuff, if you don't, what are you then, I ask you? What? Mentally *ill*. Fact, Jim, fact – if you don't buy things – toilet paper, new cars, computerized yo-yos, electrically-operated sexual devices, stereo systems with brain-implanted headphones, screwdrivers with miniature built-in radar devices, voice-activated computers…

Jeffrey Goines: You know what crazy is? Crazy is majority rules. Take germs, for example.
James Cole: Germs?
Jeffrey Goines: Uh-huh. In the eighteenth century, no such thing, nada, nothing. No one ever imagined such a thing. No sane person, anyway. Ah! Ah! Along comes this doctor, uh, uh, uh, Semmelweis, Semmelweis. Semmelweis comes along. He's trying to convince people, well, other doctors mainly, that's there's these teeny tiny invisible bad things called germs that get into your body and make you sick. Ah? He's trying to get doctors to wash their hands. What is this guy? Crazy? Teeny, tiny, invisible? What do you call it? Uh-uh, germs? Huh? What? Now, cut to the 20th century. Last week, as a matter of fact, before I got dragged into this hellhole. I go in to order a burger in this fast food joint, and the guy drops it on the floor. Jim, he picks it up, he wipes it off, he hands it to me like it's all OK. „What about the germs?” I say. He says, „I don't believe in germs. Germs is just a plot they made up so they can sell you disinfectants and soaps.” Now he's crazy, right? See?
Jeffrey Goines: Ah! Ah! There's no right, there's no wrong, there's only popular opinion.